Not much is known about St. Edmund the Martyr, the king of East Anglia in the mid-9th century.  In 869, a coalition of Scandinavian warriors known as the ‘Great Heathen Army’ invaded St. Edmund’s land, and according to tradition, after his defeat in battle, Edmund was beaten, shot by arrows, and finally beheaded after refusing to renounce Christ.

Come the early 1600’s, St. Edmund’s body had found its way in the Basilica of Saint-Sernin in Toulouse, France.  Through St. Edmund’s intercession, the city was saved from the plague that took place from 1628 to 1631, after which a new shrine was built for his relics out of thanks for his intervention.

St. Edmund is an excellent saint for us to pray to and request intercession from.  Not only is he a patron saint of pandemics, but as a martyr, he’s an exemplification of fortitude, fortitude that enabled him to endure great suffering for the sake of Christ.  For the past few weeks, I’ve been lucky enough to be allowed back to St. Polycarp’s to assist with streaming Sunday Mass, which has been a tremendous blessing.  The fact remains, I am the exception, not the rule, and for the vast majority of us, Psalm 42:3 rings especially loud:  “My soul yearns for God, the living God.  When can I enter and see the face of God?”  Remain steadfast, and pray for St. Edmund’s intercession for a quick end to the pandemic and the fortitude to remain steadfast and faithful, so that soon we may all once again enter and see the face of God. 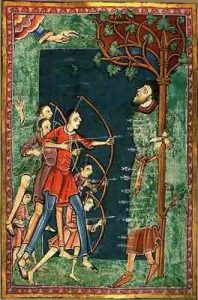